As I was walking through the Annapolis Boat Show I was struck by how similar the new boats seemed to be. To the untrained eye they would’ve been difficult to tell apart from one another. If it hadn’t been for the prominently displayed builders and designers logos. They were all very similar in their concepts. From the high free board, wide sterns, roomy cockpits etc. I could go on and on, but for the purpose of this blog I’ll stick to another common feature. Bowsprits and the sails set on them. 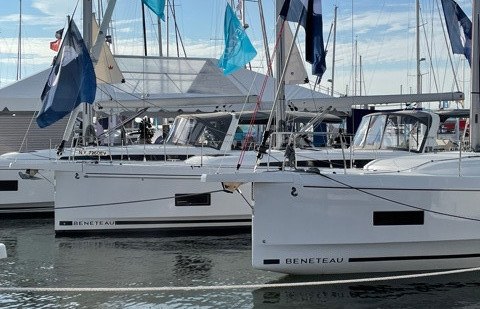 Not too long ago, the only boats that had bowsprits were traditional and classic boats. Yachts from a bygone era, when most boats were wooden, and nearly all had bowsprits. In the fiberglass boat era and the Marconi rig most boats had no bowsprits. Bowsprits started making a comeback in racing boats with the increased popularity of asymmetric downwind sails. Now it seems they have made their way onto cruising boats as well.

When I was growing up, the easiest way to tell racing and cruising boats apart was that race boats flew spinnakers and cruising boats did not. Symmetrical spinnakers, with their poles and all the attendant lines and paraphernalia, were a handful even for full crews. Only the most proficient sailors would fly them while cruising shorthanded. I would estimate that over 90% of the cruising boats that came into our loft in the Caribbean did not even have a spinnaker on board.

I remember when the first Gennakers were introduced, sometime in the 80s I think. These were supposed to be a mix of a Genoa and a spinnaker and were much easier to use as they took away the need for lots of crew and a spinnaker pole. Instead of the spinnaker being tacked to the end of a pole up in the air, it could now be tacked to the bow of the boat. Now instead of gybing the pole, you only needed to gybe the sail. All done from the safety of the cockpit with less crew.

In order to gybe these spinnakers more efficiently, the tack of the spinnaker needed to be as far forward of the fore stay as possible. Hence, the reintroduction of the bowsprit and the ability to set different types of downwind sails. This was the dawn of the asymmetric spinnaker time and return of the bowsprit. 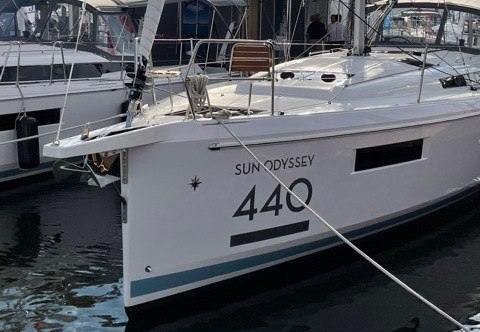 Bowsprits and asymmetrical spinnakers may well have remained only in the race boat scene. Even with the more relative ease of handling the spinnaker, it is still a big undertaking. Especially for shorthanded blue water voyaging and even for day sailors. Putting up and taking the spinnaker down was still the sticking point. This still needed lots of knowledgeable or experienced hands.

If only we could furl up the spinnaker as easily as we do with our Genoas on the fore stay…Well now we can! First came the Code 0 furler. This was for the Code 0 sail which in most simple terms, a very full head sail with a large positive Leech profile and made for reaching conditions. It is deployed on its own furler and is usually furled and unfurled when tacking or gybing. This was a great improvement but still wasn’t ideal for broad reaching or sailing dead downwind.

For downwind sailing the asymmetric spinnaker in a snuffer was the standard. But this still required someone going onto the fore deck to put up or take down. However, recently came the introduction of the Top Down Furler that was designed to furl and unfurl a regular spinnaker. This was a game changer in that it needed even less crew and could be operated from the cockpit with a little forethought. If this all seems confusing, just get in touch with your sailmaker and he can get you sorted.

So now we have bowsprits appearing on just about all the new cruising boats. Innovations in sails and furling technology have made the use of downwind sails easier and safer than ever before. There are even different sail options depending on your point of sail downwind. You could have both a Code 0 and a regular all-purpose asymmetric spinnaker for your boat. Each of these sails is set up with its own furling gear so making them easy to set up and stow away. Some of the new boats even had 2 different attachment points on the bowsprits.

Bear in mind that some of the links on this website are affiliate links. If you go through them to make a purchase we will earn a commission at no extra cost to you but helps support our website. Keep in mind that we link these companies and their products because of their quality and not because of the commission we receive from your purchases.